Who REALLY needs a bowl of Weetabix?

Someone with an early start?
With a bit of a challenging commute perhaps?
Big guy, beard, likes red?

Here’s how a 1 minute brief in summer ended up as the Weetabix campaign for the 25th.

It all started with One Minute Briefs. Every day they set a task to come up with a no-holds-barred ad for a random ‘thing’ – sloths, monster trucks, loo roll, potatoes – anything goes really.

A fun distraction, bit of a mental workout, but a great way to get the creative juices flowing. Frequently though, a brand gets involved with a prize, ranging from Burger King to Absolut Vodka, Oatly to KFC and… Weetabix.

The brief that day was to advertise how Weetabix sets someone up perfectly for the day ahead. Now, I reckon few people have a busier day than a certain bearded man in red who heads up a spectacular early morning shift on December 25th. We still believe he exists right?

So swapping out milk & cookies for milk & Weetabix seemed to be a nice little trick and with the tagline ‘For those who have an early start’.

It won that daily brief (ahead of around 400 other entries). Quite chuffed with that!

Then Weetabix got in touch.

So head to Weetabix on Instagram and Twitter and you’ll see how a quick idea for a bit of fun, can lead to a whole Christmas campaign.

And how it all started 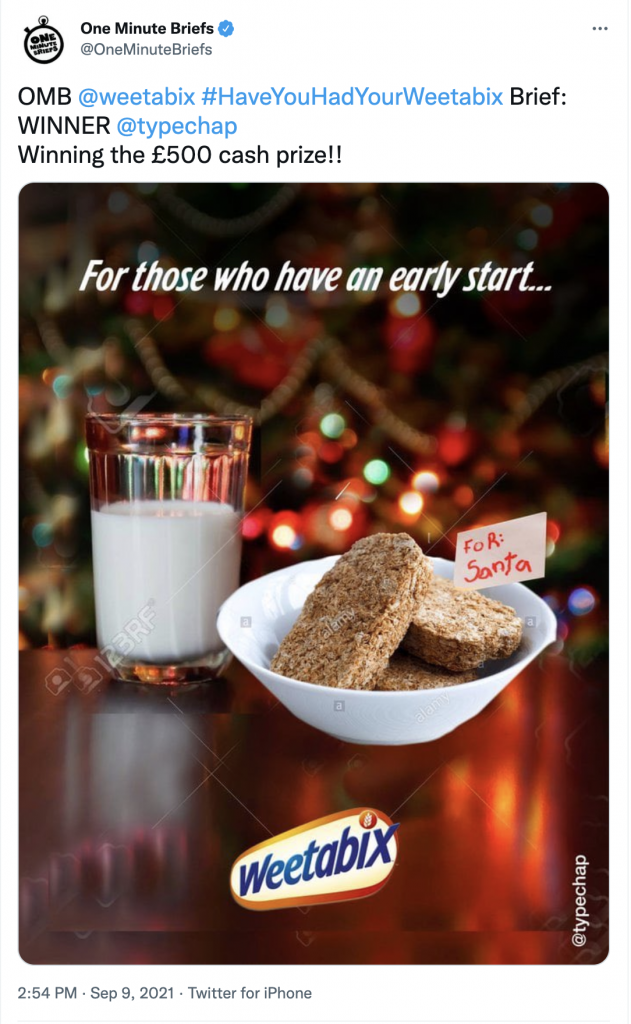